The undersigned organizations condemn the violations of the economic and social rights of several Libyan media workers, and stress that it is time to regulate the work of these media institutions in accordance with media legislation guaranteeing the rights of workers in this sector.

Over the past decade, many Libyan media workers have been subjected to arbitrary expulsions and mass layoffs due to the closures of a number of television channels, radio stations, print and electronic newspapers. Consequently, these journalists have lost their jobs, which guarantee their economic and social rights due to the absence of a clear and equitable legislative and contractual framework when they join these institutions as well as the absence of oversight by the Ministry of Labour, which is responsible for the task of labour inspection.

A number of these journalists are at risk of not being able to return to Libya due the backdrop of political loyalties to these institutions in which they have worked at. As they are abandoned today, they will have to face difficult conditions abroad that are seriously harmful to them and their families.

Some workers in private Libyan media institutions continue to suffer from delayed payments of their salaries, which has further complicated their economic and social situation. This is considered one of the most prominent risks to the journalistic profession. Some of these institutions have even denied the rights of media workers under illegal pretexts.

The Libyan Organization for Independent Media (LOFIM) has received complaints from journalists who worked for Libya Rouha Al-Watan TV channel that the channel’s management delayed the payment of financial dues to some of its journalists for several months, and over a year for others. As a result, this has created very difficult social conditions for the journalists which affected their families and their standard of living. Some of these journalists based in the Kingdom of Jordan were faced with prosecutions because they were unable to pay their financial obligations.

On 30 May 2022, the management of Libya Rouha Al-Watan, a privately-owned channel that is still licensed in Jordan and owned by a company called Al-Jadawil Media and its General Manager, Mr.Aref Al-Nayed, sent a letter to its employees announcing that it had stopped its satellite broadcasting, pledging that all employees would be paid their dues and arrears during the period between June 1-10, 2022, however this was not achieved.

Despite the promises made by the channel’s director to journalists who have not been paid their financial dues, the payment has exceeded its specified due date with over 20 days since the writing of the official statement by the channel. The director general has failed to fulfill his commitments and promises several times, and all financial dues remain unpaid until the date of writing of this statement.

“Over the past years, there has been a delay in the payment of salaries and allowances, but it had not been delayed for more than three months. Nevertheless, in recent years, financial dues have been delayed for a year and more, and I have not received any of my dues up to date, which are a total of 12 months,” said one journalist who worked for Libya Rouha Al-Watan.

(LOFIM) also received complaints from journalists who worked for Libya Panorama Channel that the channel’s management had delayed the payment of financial dues to some of its journalists for several months, and a year, too. And after the journalists demanded their rights, the channel management refused to recognize all their rights. Therefore, the employees working for this channel filed a legal complaint to the Libyan  Ministry of Labour against the Tripoli-based channel’s management, which is owned by Al-Hurrya International Media Services, but the ministry did not take any action.

Other complaints came from journalists who worked for Libya Al-Ann channel, including Mohamed Sawa, who has worked for the channel since the beginning of 2019 as a correspondent in Zintan, and was communicating with Ahmed Al-Nimr that runs the channel from Cairo.

“Mr. Ahmed Al-Nimr was the director and the one responsible for the channel and all our contacts were with him; he told us that the channel belongs to the Office of Military Guidance of the General Command in eastern Libya. Also, we worked with the channel for two years and our salaries were delayed. The channel was shut down and I did not receive my salary for eight months,” said Mohamed Sawa.

The undersigned organizations assert that the policies of private Libyan media institutions to procrastinate in resolving the payment of financial dues to their employees are a renounce of their moral and legal responsibilities, and indifference to the rights of journalists who have remained committed to working with them. These institutions should be ashamed of themselves in dealing with this file.

The undersigned organizations also appeal to the High National Election Commission (HNEC) not to accept the files of candidates who violated the economic and social rights of journalists.

At the same time, the organizations renew their call for the urgent establishment of a journalists’ Syndicate in Libya that guarantees all their rights and is a strong support in protecting their professional rights and defending them before the relevant authorities.

Signatories of the statement: 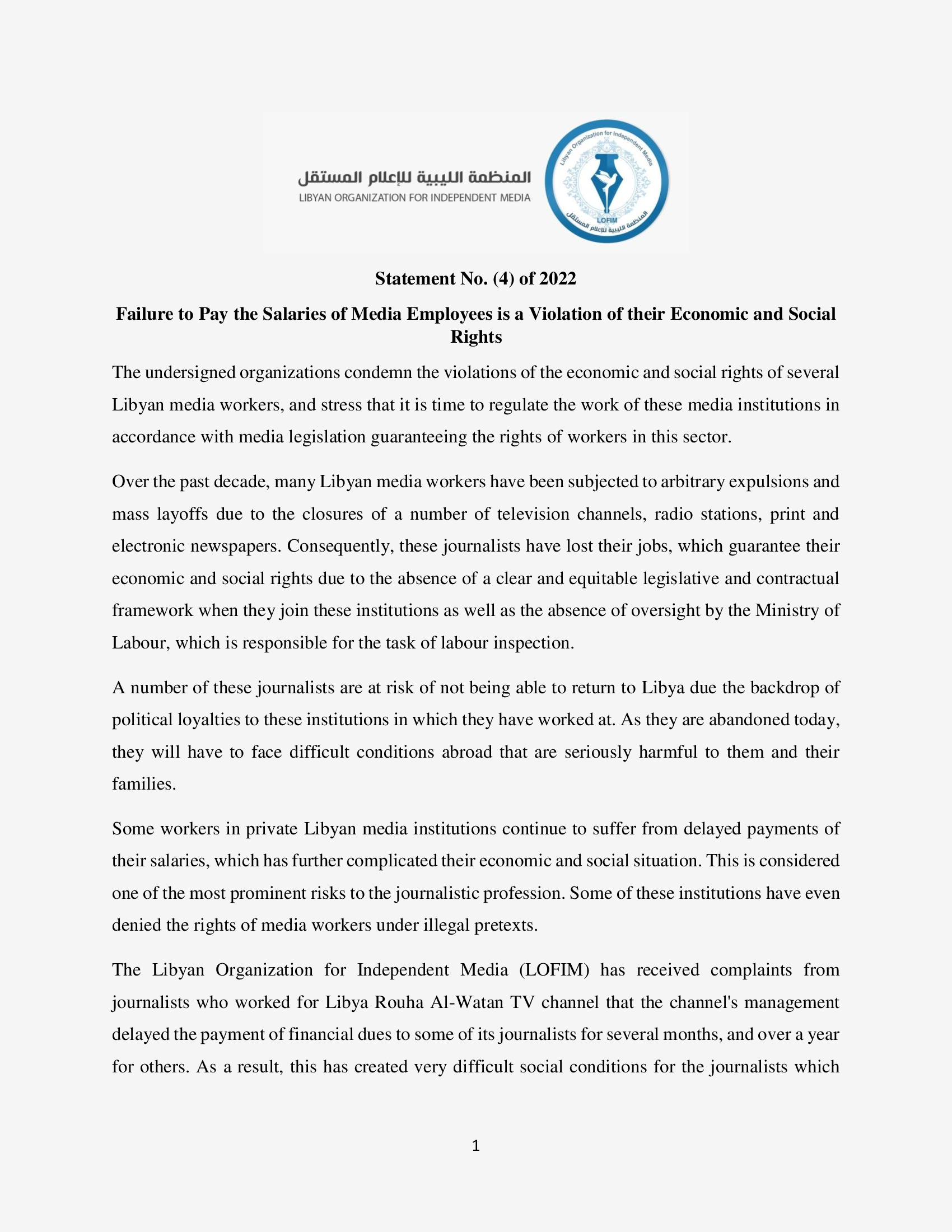 TV reporter Ali Al-Refawi released after being abducted from Sirte for more than three months.

The Abduction of a TV Reporter in the City of Sirte

The Defects of the electoral advertising Articles in the…